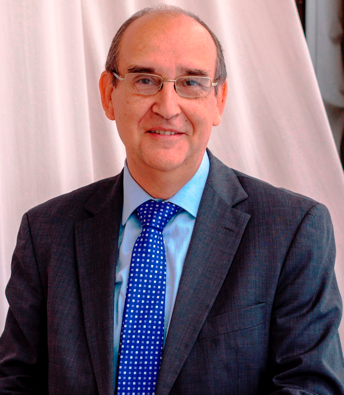 Industrial Engineering Degree at the UPC (1975), Master in Business Administration and Doctorate in Suport Systems in Decision-taking.

Since 1975 he has developped an intense professional activity both in organizational and strategical consultory and in computational technology applied to production, direction, marketing and contents. He has occupied different positions in companies like Arthur Andersen, Calfinsa, J.R. Security Systems, La Caixa, and in the Foundation “University and Tecnology la Salle”, where he was General Director. He has taken part of different administrative and advisory business councils and at present he is the General Director of the Foundation for ESDI.

He has combined his professional activity with a significant academical task: he has given lessons and conferences at many universities, author of more than 300 articles about tecnical, economical and opinion issues, and books about design, digital systems and multimedia, such as: Design of Digital Systems (1992), Multimedia, the motor of progress (1997); Digital Systems and Programmable Systems (1998), Introduction to Design (1999), The futur of Design (1999); The Society of Knowledge, an opportunity for Catalonia, challenges and instruments (2002). He is also the founder of the Tecnological Magazine INPUT and director of the collection “Papers to debate”.

He has received various awards; among them: member of honor for the USI Association and for the Technology Circle, “Gold Chip” and Award to the Communication in the Society of Knowledge through UNIACC – Chile.

You can check out some of the most significant interviews with Antoni Garrell that different radio, television and written media have published in the Interviews section of this website.